FINLAND: Drug testing and use continue to increase

Drug testing and use have continued to increase, according to data collected in autumn 2018. The most common drug used by Finns is cannabis. Cannabis trials have quadrupled from 6% in 1992 to 24% in 2018.

The second most common is the use of drugs for non-medical purposes, which has remained fairly steady in the 21st century. Other drugs have been tried by less than 5% of the population. The most common of these are stimulants such as ecstasy and amphetamine.

“As drug experimentation and use continue to increase, various disadvantages and the needs of drug users are likely to increase. New ways, ways of working and strategies for managing the situation are needed, ”says Pekka Hakkarainen, Research Professor at THL .

Recent results from drug use and drug abuse in Finland are from THL’s Substance Abuse Survey, which has been repeated every four years since 1992. 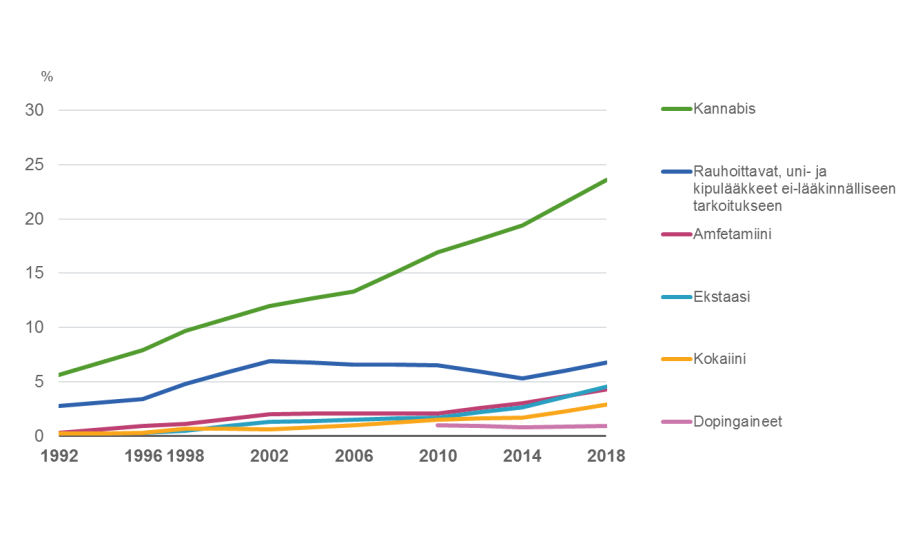 Nearly half of young adults have tried illegal drugs
The results of both 2014 and 2018 show that drug testing and use continue to increase, especially among young adults aged 25–34. In 2018, as many as 45 percent of respondents in this age group reported having used some illegal drug in their lives. In the age group 35-44, drug trials have also become more common.

“The use and prevalence of young drug use is understandably worrying. However, the results of the substance abuse study show a positive signal that the use of the youngest age group would not have become more common after 2014,” says Karolina Karjalainen, a special researcher at THL .